Christmas 1999, Gene Jameson made two wooden pocket knives to give to his two young cousins. They, and their parents, loved them. No more were made until Christmas 2008, when Gene made one for his own son, JJ. He wanted to offer something more interactive than a finished wooden knife. Instead, he wanted to make a kit that he and JJ could assemble and finish together. The key was to have precisely cut and drilled parts that could be assmebled quickly to hold the attention of a 7 year old. That first generation kit was made of Maple and Holly scraps that were scattered around the shop. That knife was JJ's Original Knife Kit and he loved it! He wanted to give them to all his friends as gifts. Since then the design has been refined somewhat, and the result is one of the best learning, craft toys on the market. This is a Canoe style knife kit with a single blade. It is "The Original" and has been the most popular over the years. Requires glue. Maple blade, spring and sides with Cherry inlay. Make 4 interest-free payments of $4.74 fortnightly and receive your order now. This knife kit has all of the most popular features of a survival style knife. The tanto style blade as well as the sides and spring are all made of Maple. The knife features Cherry overlays for the handle.

Make 4 interest-free payments of $4.24 fortnightly and receive your order now. 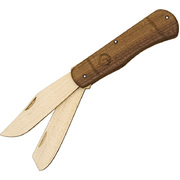 The trapper knife kit is a very popular pattern. The trapper is a double-blade design. The side pieces are Walnut and the blade and springs are Maple. This kit has 6 pieces of wood, 3 metal pins and illustrated instructions.

Packaged in a JJ's trademark tin, the canoe knife kit is a 2-blade design that is a very popular pattern. The sides are Cherry wood and the blades and springs are Maple.